Which is best for your Application?

Fog volume is a primary requirement for a customer when purchasing a fogger. Fog density is usually not specified by manufactures, but fog density is the key component in foggers; as fog density controls the distance the airflow patterns and turbulence can be visualized. The greater the fog density, the better the fog is capable of visualizing airflow. Fog Volume is a derivative of fog density. Volume tells you how many cubic meters can be produced per minute or during an operating cycle, so that you can compare to your clean area volume and determine which fogger best meets your needs Most manufacturers do not bother to discuss fog volume, fog density or visual fog distance.  Applied Physics offers two cleanroom foggers and we discuss all three components of the fog capabilities on all of our foggers. The CRF2 is the low cost fogger for fume hoods, smaller bio-safety cabinets and glove boxes, producing 0.26 cubic meters per minute with 57 ml of fog density / minute and 7-8 feet visual fog distance. The CRF4 Cleanroom fogger produces 5X more fog than the CRF2 with 3X more fog density and 2X more visual airflow distance. To calculate fog density, find out the actual fill volume of the fogger and the actual operational time of the fogger. Ultrasonic foggers use an piezo devices under water, which then are powered to generate fog vapor that is pushed into the airflow to visualize patterns, turbulence and dead spots.  CRF2 fog density is calculated at (3780 ml-500ml static water) / 60 minutes operation = 58.33ml fog density. For ultrasonic foggers using a high output transducer assembly, the CRF2 Clean Room Fogger produces the highest fog density of any ultrasonic fogger sold in the semiconductor and pharmaceutical industry today.
The Cleanroom Fogger is used in smoke studies for airflow visualization using Distilled or WFI Water to produce a pure fog to visually describer airflow, patterns and turbulence in semiconductor clean rooms, pharmaceutical ISO suites, bio-safety cabinets, compound pharmacies and medical rooms for contamination control. It is used in Pharmaceutical suites in support of USP 797 Pharmaceutical In-Situ Airflow Analysis and supports the proposed USP 800 for Hazardous Drug Compounding.

The Cleanroom Fogger, CRF-2, is used in smoke studies and often referred to as a smoke generator, which is used to visualize airflow patterns and turbulence in clean rooms and pharmaceutical ISO 3, ISO 5, ISO 7 and ISO 9 suites. The CRF-2 will provide instant on/off operation as an airflow visualizer for smoke studies to monitor patterns and turbulence in controlled clean room areas. 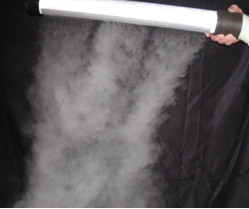 The CleanRoom Fogger is used in smoke studies as a smoke generator. It is a significant improvement over other Di Water Foggers by providing the highest volume output of all DI Water foggers sold today, reducing the weight by using a polypropylene enclosure rather then a costly SS enclosure. And Operation instructions are located on the right panel, so there is no paper manuals used in the pharmaceutical ISO 9 suites, laboratory or clean room.

Theory of Operation: Ultrasonic cavitation and DI water or Pharmaceutical WFI Water. Use of any other liquids or chemicals will void the warranty.

The transducer life is ~5,000 hours. To protect the transducers from damage there is a level sensor that will interrupt the input voltage to the transducer module, should the water level drop to a low level. This ensures long life and reliability.
Notes:

Ultrapure LN2 Fogger: This type of smoke generator or clean room fogger provides the highest volume, density and purity of fog. Purity is created by bringing the water to a high temperature, creating a vapor, while simultaneously using gravity to remove the residual mass from the vapor. This process removes any bacterial agents and residual particulate matter from the vapor. The pure vapor is then passed over an LN2 bath, which naturally boils at room temperature. The water molecules bond with nitrogen molecules, creating a nominal 3um fog droplet. The volume of water and nitrogen molecules that combine is extremely high in quantity, creating a dense, high volume, ultrapure fog output with exit temperatures of about 78 degrees F with an exit pressure of less than 0.5 lbs, so as not to disturb the surrounding airflow. The fog is ultrapure leaving minimal, if any, trace particles behind. It evaporates to its gaseous hydrogen, oxygen and nitrogen components, which are natural to the Cleanroom environment. The high density of the fog increases the duration and travel distance of the fog. This fogger can be used in a Class 1 – 10,000 cleanroom environments of pharmaceutical and semiconductor facilities; such as sterile rooms, hospital rooms, medical rooms and cleanrooms.

DI Water Fogger: This type of fogger has less fog density (less capability to visualize airflow) than the UltraPure Fogger described above, but more density than the CO2 fogger described below. The DI water fog is generated by atomizing DI water into water droplets, which are nominally 3-10um in size. The water droplets may contain residual particulate matter remaining in the DI water, but this would be very trace amounts. If the facility manager operates a class 10 to Class 10000 Clean room, the use of a DI Water Fogger poses no problem. However, Cleanroom Engineers who manage facilities operating at Class 1 to Class 10 performance may desire to use an ultrapure fogger. Although some DI Water foggers are described as ultrapure, unless the DI water is vaporized to remove bacterial agents and residual particulate matter, the fog is not ultrapure. The 3-5lb output pressure of a DI water fogger also distorts the airflow patterns, thus adding to the turbulence. The temperature output is typically less than the surrounding room temperature, thus a fog generated from the atomized water droplets will sink momentarily in a typical 70 degree room temperature.

CO2 Fogger: This type of smoke generator or CO2 Fogger is designed for low volume, non-process critical applications such as bench airflow testing. The fog is created using CO2 ice as the fogging agent. The fog contains elements of the CO2 and the user must determine if the residual CO2 components are acceptable in a process environment operating Class 100 to Class 10,000. The 3-5lb output pressure of a CO2 fogger also distorts the airflow patterns, thus adding to the turbulence. The output starts at about 3cfm and slowly decreases to 0 CFM in about 10 – 12 minutes.

A smoke stick is often used visualize airflow turbulence, but smoke sticks are filled with particulates and chemicals. Smoke is created using chemical reactions; thus the smoke is SPUTTERING (sputter) or popping out of the smoke stick in a non-consistent pattern with velocity, but little volume. It is a particle smoke, compared to a visible, pure water based fog, thus smoke sticks are a contaminating smoke. The smoke stick generates an inconsistent flow or pattern of smoke, but it is low cost, which is why some managers allow use of smoke sticks in their Pharmaceutical clean rooms.

Compare a smoke stick to a Clean Room Fogger or an UltraPure LN2 fogger, both which produce a constant volume of fog with a consistent fog output and pure fog. Di Water foggers produce a consistent flow of visible water vapor, which enters the airflow to visualize the airflow patterns and turbulence, then begins to evaporate, returning back to the hydrogen, oxygen and nitrogen components that we breathe. No particulate contamination, no chemical contamination. Water based foggers produce a constant volume of fog at a constant rate, which provides consistent visualization of airflow patterns and turbulence. The Smoke Stick has to be waved around to see what kind of airflow pattern there is, while a Di Water fogger is simply placed in position and produces a flow of fog that can be directed 360 degrees to easily describe the airflow patterns and turbulence. In addition, tubes are now available to create “fog curtains”, or a wall of fog, which smoke sticks can not produce.

How many smoke sticks are used per smoke cycle? How much labor is needed to clean up after smoke stick use. Do you need to Clean all the walls where the smoke stick was used. How did the chemical particulates and particles affect the process area? These are critical questions for a pharmaceutical manager. Did the contaminating particles and chemicals get into the drug process?

The low labor cost of using smoke sticks is the reason facility managers may use smoke sticks, but are the chemical and particulate effects to the pharma process being analyzed? Non-contaminating fog does not emit particulates, requires less labor and does not contribute any unwanted chemicals to the Pharma process. A Di Water Fogger provides these advantages in fog volume, fog consistency and fog purity, which easily outweighs the low cost of smoke sticks, the high cost of labor for cleanup and the detrimental affects to quality control!

Smoke Sticks – labor side of the drug product: The smoke is generated by a chemical reaction, which causes the smoke to sputter into the environment. The smoke is inconsistent in volume, thus the smoke stick is unpredictable for airflow visualization. The chemicals migrate to equipment and walls, which then must be cleaned, and requires an added labor cost. The use of Smoke sticks generates an inefficient smoke, not a consistent fog.

Glycol Foggers – Glycol foggers use water combined with a glycol liquid, which has a long strand, glycol molecule. Glycol produces produces excellent visible fog; but the long strand molecules degrade HEPA filters by choking the filter material. This reduces airflow efficiency, and eventually an odor within the filter and airflow occurs. In most cleanrooms, glycol is considered a contaminate, as the glycol residue needs to be wiped clean, requiring more labor and manpower. In a pharmaceutical process, how does the facility manager clean 100% of the glycol residue from the clean room? How much of the glycol residue enters into drug process?

A Di Water Fogger produces a water (H2O) droplet that evaporates back into hydrogen and oxygen, the air we breathe. No clean up is required, at all. No additional time delays and clean up labor is not required. The fog is consistent in volume and constant in output to describe the airflow patterns and turbulence. These are equipment, quality and application concerns to consider when the need for airflow visualization is considered.