A Calibration Wafer Standard is a NIST traceable, PSL wafer standard with Size Certificate included, deposited with monodisperse polystyrene latex beads and narrow size peak between 40nm and 10 microns to calibrate the size response curves of Tencor Surfscan 6220 and 6440, KLA-Tencor Surfscan SP1, SP2 and SP3 wafer inspection systems. A Calibration Wafer Standard is deposited as a FULL Deposition with a single particle size across the wafer; or deposited as a SPOT Deposition with 1 or more particle size standard peaks, precisely located around the wafer standard. 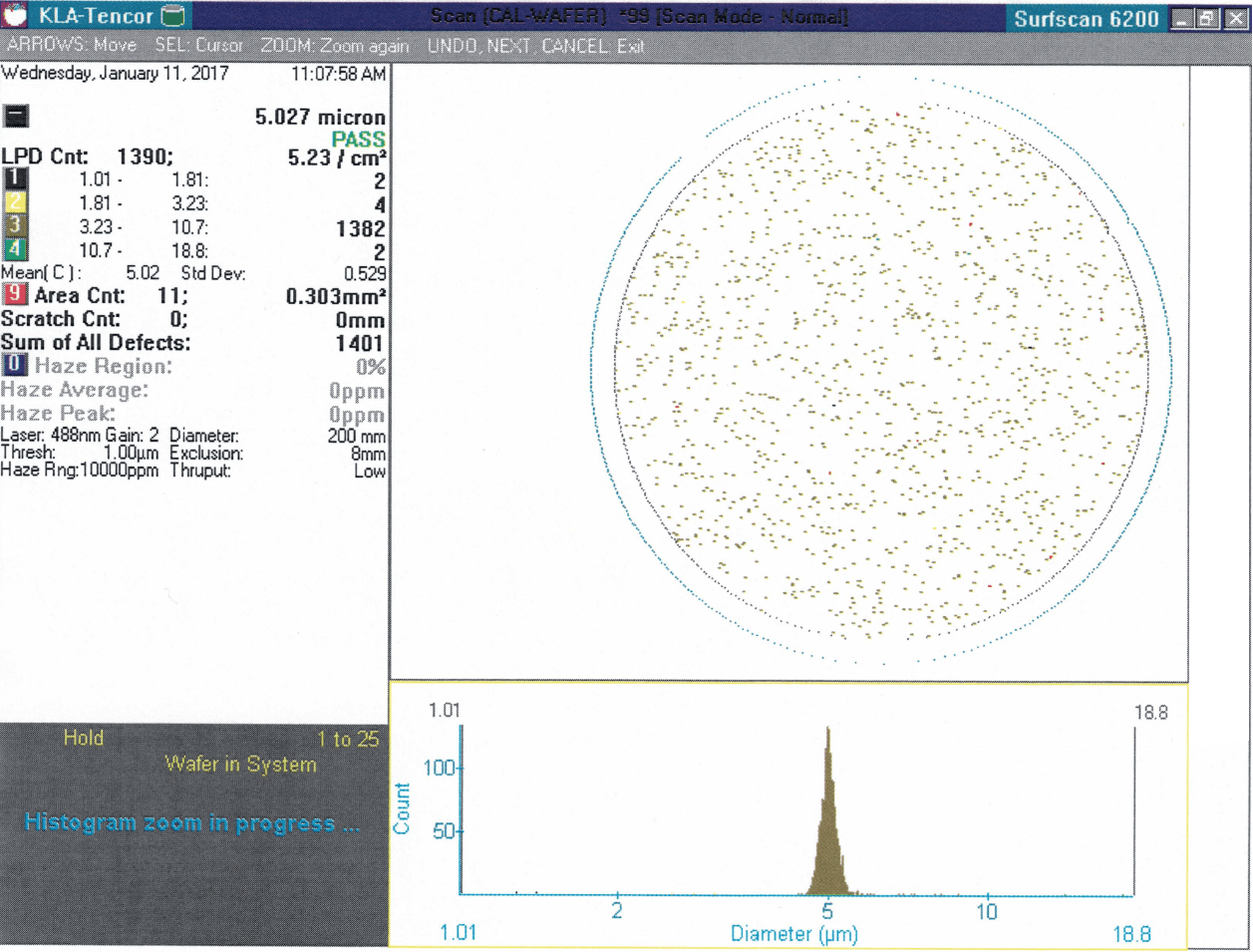 A Calibration Wafer Standard is used to verify and control two specifications of an SSIS tool: size accuracy at specific particle sizes and uniformity of scan across the wafer during each scan. The Calibration wafer is most often provided as a full deposition at one particle size, typically between 40nm and 12 microns. By depositing across the wafer, i.e, a full deposition, the wafer inspection system keys in on the particle peak, and the operator can easily determine if the SSIS tool is in specification at this size. For example, if the wafer standard is 100nm, and the SSIS tool scans the peak at 95nm or 105nm, then the SSIS tool is out of calibration and can be calibrated using the 100nm PSL Wafer Standard. Scanning across the wafer standard also tells the technician how well the SSIS tool detects across the PSL Wafer Standard, looking for similarity of particle detection across the uniformly deposited wafer standard. The surface of the wafer standard is deposited with a specific PSL size, leaving no portion of the wafer not deposited with PSL Spheres. During the scan of the PSL Wafer Standard, the uniformity of scan across the wafer should indicate the SSIS tool is not overlooking certain areas of the wafer during the scan. Count accuracy on a Full Deposition wafer is subjective, since the Count Efficiency of two different SSIS tools (Deposition site and Customer site) are different, sometimes as much as 50 percent. Thus, the same Particle Wafer Standard deposited with a highly accurate size peak of 204nm at 2500 counts and counted by SSIS tool 1, may be scanned by SSIS 2 at customer site and the count of the same 204nm peak may be counted anywhere between 1500 count to 3000 count. This count difference between the two SSIS tools is due to the laser efficiency of each PMT (photo Multiplier Tube) operating in the two separate SSIS tools. Count accuracy between two different wafer inspection systems are normally different due to the laser power differences and laser beam intensity of the two wafer inspections systems. 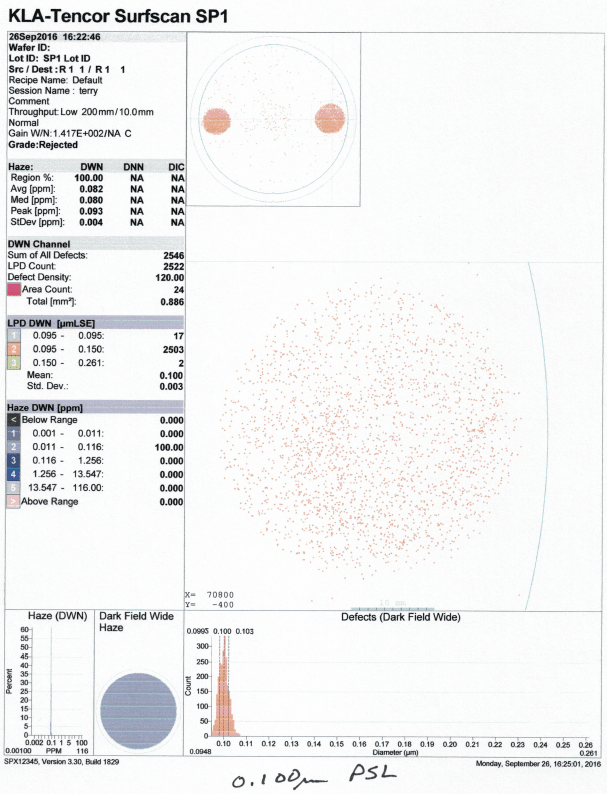 A Calibration Wafer Standard with a Spot Deposition has the advantage in that the spot of PSL Spheres deposited on the wafer is clearly visible as a spot, and the remaining wafer surface around the spot deposition is left free of any PSL Spheres. The advantage is that over time, one can tell when the Calibration Wafer Standard is too dirty to use as a size reference standard. Spot Deposition forces all the desired PSL Spheres onto the wafer surface at a controlled spot location; thus very few PSL spheres and improved count accuracy is the result. Applied Physics uses a Model 2300XP1 using DMA (Differential Mobility Analyzer) technology to ensure the NIST traceable PSL size peak deposited is accurate and referenced to NSIT Size Standards. A CPC is used to control count accuracy. The DMA is designed to remove unwanted particles such as Doublets and Triplets from the particle stream. The DMA is also designed to remove unwanted particles on the left and right of the particle peak; thus ensuring a monodispersed particle peak deposited on the wafer surface. Depositing without DMA technology allows unwanted doublets, triplets and background particles to deposit on the wafer suraface, along with the desired particle size.

Either Polystyrene Latex Spheres (PSL Spheres) or Silica nanoparticles can be deposited.

PSL Wafer Standards with a Spot Deposition are used for size accuracy calibration of the SSIS.

The PSL Direct Deposition method uses a PSL Sphere source, diluted to the appropriate concentration, mixed with a highly filtered (20nm) airflow or dry nitrogen flow and uniformly deposited over a silicon wafer or blank photo mask as a full deposition or a spot deposition. The Direct Deposition, Particle Deposition System is less expensive, and best used for Peak PSL Size depositions from 80nm to 5 mircons.

If several companies producing the same size of PSL spheres are compared, for example at 204nm, one may measure a difference in the peak size of the two PSL depositions from the companies, possibly as much as 3 percent. Manufacturing methods, measuring instruments and measuring techniques cause this delta. However, this means that any Wafer Deposition tool using only PSL Direct Deposition to deposit PSL Spheres directly from a PSL bottle relies on the accuracy of the PSL size peak in the bottle source. 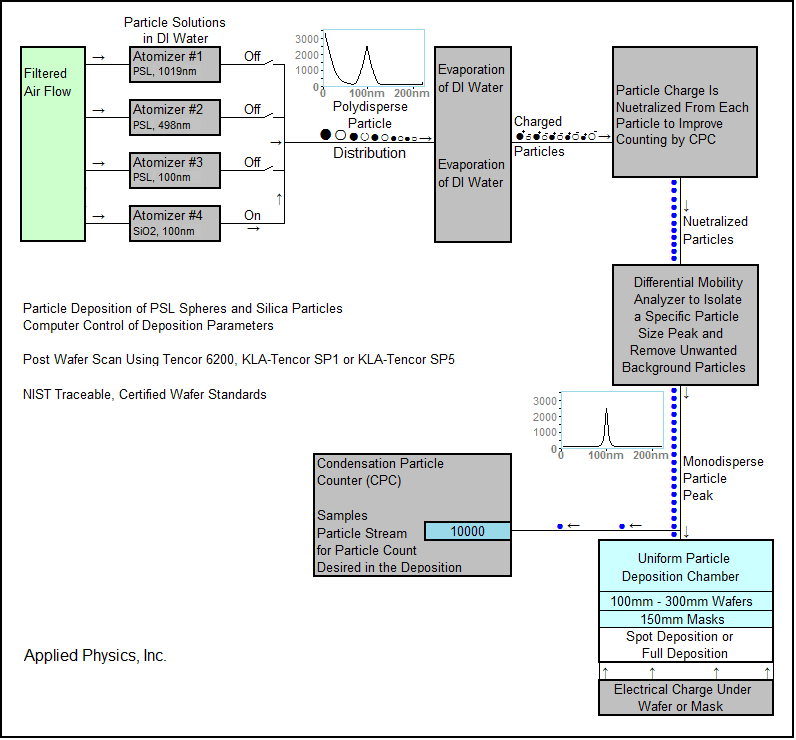 The second and far more accurate method is DMA (Differential Mobility Analyzer) Deposition Control. DMA control allows key parameters such as airflow and DMA Voltage to be controlled, either manually or thru an automated recipe control, over the PSL Spheres and silica particles to be deposited. The DMA is calibrated to NIST Standards at 60nm, 102nm, 269nm and 895nm. The PSL spheres and Silica particles are diluted with DI Water to the desired concentration, atomized into an aerosol, mixed with Dry Air or Dry Nitrogen to evaporate the DI water surrounding each PSL sphere or silica particle, and charge nuetralized to remove double and triple charged particles. The particle stream is then directed to DMA using highly accurate airflow control. The DMA isolates a specific particle peak, while also stripping away the unwanted background particles on the left and right side of the desired size peak. The DMA provides a narrow, particle size peak at the precise size desired; which is then directed to the wafer surface. The particle stream is deposited uniformly across the wafer as a FULL Deposition, or deposited in a small round spot at any point around the wafer, called a SPOT Deposition, while simultaneously being counted for count accuracy. The DMA calibration using NIST SRM Size Standards ensures the size peak is highly accurate in size and narrow, so as to provide superb calibration for a KLA-Tencor SP1 and KLA-Tencor SP2, SP3, SP5 or SP5xp.

If for example, 204nm PSL Spheres from two different manufacturers were used in a DMA controlled, Particle Deposition System, the DMA would isolate the same exact size peak from those two different PSL bottles, so that a precise 204nm would be deposited onto the wafer surface.

A DMA controlled, Particle Deposition System is also able to provide much better count accuracy, as well as computer recipe control over the entire deposition. IN addition, a DMA based system can deposit real process particles, such as Silica particles.