The DF2S Sterilizing DryFogger is well known for its high efficiency in killing unwanted, bio-contamination in ISO suites, sterile rooms medical rooms using several types of sterilants. DryFoggers do not apply liquids to surfaces where a wipe down would then be needed. DryFoggers emit an aerosol vapor, which evaporates to a gas state; thus not require a wipe down.

The DF2S Dry Fogger is designed with stainless steel and can use hydrogen peroxide to safely sterilize yeast, molds and bacteria on cannabis leaves and other organic leaves and tubulars; or use a combination of paracetic acid combined with a very aggressive sterilant, such as Minncare, to kill sporicides, yeast, molds, viruses, Mycobacteria in ISO Suites, sterile rooms, buildings and medical rooms from 7000 cubic feet in volume up to 35000 cubic feet in volume.

The DryFogger operation starts by rolling the DF2S into position in the area to be sterized, connecting it to your dry air compressor and filling your desired sterilant into the DryFogger. The Sterilizing process begins by turning the dry compressor on; which pushes the sanitizing liquid from the liquid chamber into stainless steel atomizers designed to convert the liquid into an aerosol at a nominal 7 micron vapor droplet. As the vapor begins to permeate into the room, the sporicidal agent and bactericidal disinfectant begins to evaporate to a gas to spread throughout the area and kill more than 99.997% of yeast, mold, fungi and bacteria bio-contamination. There are a number of accessories available to test the air environment after decontamination.

If using the DF2S is to sterilize organic growth such as cannibus leaves or plant foods, a hydrogen peroxide solution is used at a typical 3-5% solution in water. If your goal is to sterilize bio-contamination in pharma process areas, then a combination of paracetic acid and aggressive sterilants, such as Minncare would be typically used to kill off Bacteria, Yeast, Molds, Mycobacteria, Bacterial Spores and Viruses; killing unwanted bio-contamination in air, on surfaces, behind and under physical objects in the room. An aggressive sterilant using parasitic acid and Minncare solution can kill sporicides, yeast, molds, viruses, Mycobacteria up to 99.997 % efficiency. The DF2S Dry Fogger may be quite useful to sterilize areas contaminated with SARS and Coronavirus. 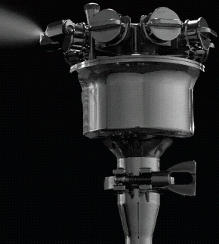