The CRF6 is an advanced, portable clean room fogger with a stainless steel enclosure and dual, 80mm fog outlets to get more fog output in a shorter time for your smoke study. It uses deionized (DI) water, sterile water and water for injection (WFI) to generate 2.0 cubic meters of pure fog per minute for about 45 minutes at 213 ml fog density per minute to provide from 12 to 15 feet visible fog distance using a dual fog output. Compare other foggers to the CRF6 by verifying fog volume output? How much fog density does the competitive fogger provide? Can it be controlled directly and remotely with a wireless control? Does it have common sense accessories for your smoke studies? The CRF6 provides all these needs and supports smoke studies in BSCs, RABs, Barrier isolators, glove boxes and medium sized clean rooms.

CRF6 Cleanroom Fogger for use in Bio-Safety Cabinets, RAB, Barrier Isolator and Cleanrooms

The CRF6 is ideal to visualize airflow in pressurized clean areas, such as glove boxes and barrier isolators. The CRF6 can be operated by remote control or direct touch pad control, and because the CRF6 is relatively compact in size, it can be inserted inside or beside a glove box, RAB or barrier isolator, allowing the dual fog outlets to provide fog to two inputs of your smoke study, while allowing the fog flow velocity to be adjusted directly or by wireless remote. The CRF6 is designed to tune the dual fog output to your airflow dynamics, providing up to 12 to 15 feet visible airflow. The CRF6 Cleanroom Fogger is primarily used in pharmaceutical clean rooms, ISO suites, sterile rooms, bio-safety cabinets, RABs and medical rooms. Airflow guidelines ISO 14644-3, USP 797, Federal Standards 209E and its replacement ISO Standard 14644-1 and 14644-2 are supported for airflow recovery tests.

Applied Physics provides clean room foggers to visualize airflow turbulence, patterns, velocity, and dead zones during smoke studies. The CRF6 uses only DI water, WFI or Steril Water and produces as much pure fog as the small ultrapure foggers using LN2 and DI Water. The CRF6 includes adjustable airflow velocity, adjustable fog volume and wireless remote control, which is not found on competitive ultrapure foggers. So the CRF6 costs about the same as the smaller LN2 smoke machines, but provides more fog output than the original LN2 foggers. It is much easier to set up and operate, and offers many more accessories to support your various smoke study requirements.

The advantage of the CRF6 is the fog density generated at 213 ml per minute, which is higher than any other smoke machines in the world. When you look at the different smoke generators available, it is important to determine how much fog volume the fogger produces? How much fog density is generates? And the typical visual distance of the fog in typical sterile room operation. All foggers provided some form of direct control of the fog, but does your smoke generator offer wireless remote control of the fog operation, so that it can be used inside a closed area. 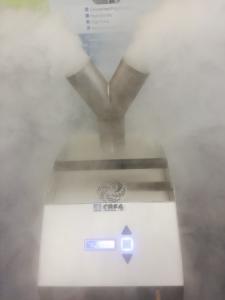 Watch CRF4 Fogger Video. The CRF6 is the smoke generator to select when you want higher volumes of fog, dual fog output, adjustable fog controls, but do not want to use liquid nitrogen in your smoke study. It is the fog density and fog volume that generates visual fog distance. Most fog generators are described without referring to fog volume, fog density and visual airflow distances, showing marketing pictures of the smoke machine without describing fog performance. If the smoke generator you may be considering does not describe its’ actual fog performance, how do you know if the fog generator can meet your smoke study objectives? The CRF6 describes the fog volume, fog density and visible airflow distances, because customers buy smoke machines to achieve a desired level of air flow visualization in their smoke studies. There are a variety of accessories that can be plugged directly to the CRF6 output or attached to two 5 meter fog hoses, or just one hose. 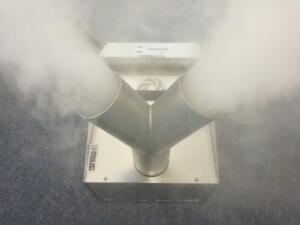 When an engineer reviews different smoke machines for their smoke studies, many suppliers of fog machines show limited technical detail. The purpose of a smoke generator is to visualize airflow, so it is important to know how much fog volume is provided by a fog generator? It is important to determine how much fog density is provided, as fog density is what enhances visual fog distance and fog volume emitted? You should know what the fog machine produces in fog volume, fog density and fog distance so that you can determine if it supports your needs. Watch CRF4 Video.

The CRF6 uses 40 ultrasonic piezo devices to generate a pure fog of 2.0 cubic meters / minute for about 45 minutes with 213 ml of fog density. You can visualize an area of about 12-15 feet using using the dual, 80mm fog outlets and hoses; or cap one output and use a single fog hose for a smaller smoke study. Ultrasonic produced smoke is the more consistent method of producing a pure fog with lower cost to produce higher volumes of fog. The CRF6 ultrasonic fogger is less expensive, lighter weight than LN2 foggers and provides control of fog volume, control of fog density and offers wireless remote control for use inside a closed RAB, Barrier Isolator, etc.

CRF6 Portable Fogger
The CRF6 can be turned on or off at will, and refilled with DI Water, Sterile Water or WFI Water as needed. The fog volume can be adjusted higher to 2.0 cubic meters fog / minute or lowered to 0.5 cubic meters fog per minute, and the airflow can be adjusted from 10% to 100% airflow to fit your clean room air flow dynamics. The CRF6 does not use LN2, yet produces as much fog as the smaller LN2 foggers and the fog output can be adjusted; for a lower cost than any LN2 ultrapure fogger. The only maintenance is to drain water and to air dry the water cavity immediately after each fog study. In order to create larger volumes of fog, 40 ultrasonic piezos are used, which vibrate at high frequencies, generating high volumes of vapor droplets at a diameter of about 8 microns. The fog vapor is suspended just above the water line, and then captured by the internal airflow and directed outside the fogger into the clean room or clean area. Attach two 5 meter fog hoses to direct fog as needed. If you prefer a single or dual, 50mm fog hose is available with 0.6 meter fog wands attached to each fog hose.

If the airflow needs to be adjusted, simply touch the up arrow for increased airflow to match your clean room airflow. Or touch the down arrow to decrease the airflow.

If fog volume needs to increase or decrease, go into mode control and adjust from 25% fog volume to 100% fog volume during operation.