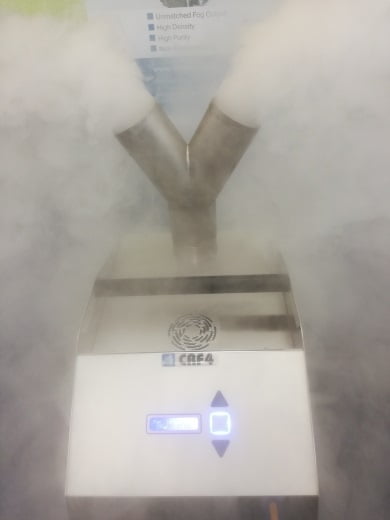 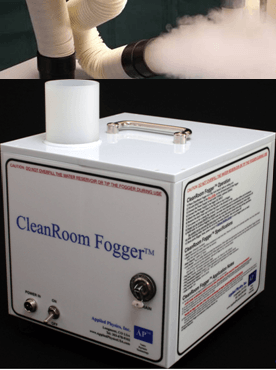 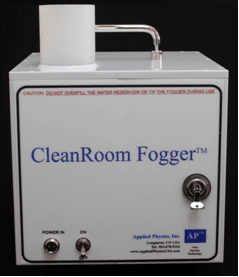 Deionized water, commonly referred to as DI water, Sterile Water and Water for Injection or WFI, are used in a DI water Fogger. These tools are often referred to as a smoke machine or smoke generator, and are used in smoke studies of fume hoods, airflow hoods, glove boxes, smaller areas. Because the DI water and WFI water have been purified in one manner or another, the resulting fog is a pure fog used to visualize the patterns of airflow. Although many people use the phrase of smoke machine and smoke study, the pure fog is technically not a smoke, which is composed of particles. The pure fog is a water vapor at 7-10 microns in diameter, at a fog density sufficient to provide a visual understanding of the airflow movement. While the CRF4 fogger produces 5 times more fog, 3 times more fog density and 2 times more visual fog distance, the CRF2 is less expensive. So each of these two smoke machines meet the particular needs of Quality Assurance managers, for either fog volume desired, or low cost desired. DI Water Foggers are used to visualize airflow turbulence, airflow balance and patterns in clean rooms, ISO suites, bio safety cabinets, fume hods, etc. The CRF2 has the operating instructions labeled on the right side of the enclosure, and the left panel provides a convenient water fill view port. DI Water Foggers support ISO 14644-3, Annex B.7 Airflow Direction Test and Visualization; USP 797 Insitu Airflow Analysis and Semi-Standards Clean Room guidelines for airflow visualization and analysis.

Theory of Operation: Ultrasonic cavitation using DI water or WFI water, a pharmaceutical Water for Injection. Use of any other liquids or chemicals will void the warranty.

Which smoke generator Is Best For my Smoke Studies?