In 2001 portable cleanroom foggers were introduced and now the AP35 LN2 fogger is a significant advancement with 3X more ultrapure fog volume, adjustable fog volume control, adjustable airflow control and wireless remote control. The AP35 uses liquid nitrogen and deionized water, sterile water or Water for Injection to create a very dense, ultra pure fog to provide superb visualization of airflow patterns, flow direction, turbulence and dead zones for up to 70 minutes in clean rooms, ISO suites, sterile rooms, barrier isolators and medical rooms. The AP35 provides 5 cubic meters ultrapure fog per minute with about 571 ml fog density each minute, superb for visualizing airflow and turbulence. More than 20-30 feet of air flow visualization is provided in the clean room using two 80mm fog outputs. 3D airflow modeling is accomplished very well and no contamination is created and no clean up of any kind is required after visualizing the airflow. The AP35 ultrapure LN2 fogger supports airflow visualization guidelines as defined by USP797 Insitu Airflow Analysis, ISO 14644-3, B7; Federal Standards 209E and its replacement ISO Standard 14644-1 and 14644-2.

Ultrapure foggers are compared in fogger performance by determining Fog Density over time.

A Ultrapure Nitrogen Fogger uses LN2 and De-ionized Water or WFI water to generate a very dense, ultrapure fog for the best visualization of airflow patterns, direction, turbulence, dead zones and airflow velocity in clean rooms, ISO suites, sterile rooms, barrier isolators and medical rooms. Adjustable fog output is provided from 2 to 5 CUBIC METERS of ultrapure fog per minute with a typical 20-30 feet of visualization of turbulence in the airflow and around equipment. 3D airflow modeling is superb with the AP35 Ultrapure fogger. No contamination is created and no clean up of any kind is required after fog process is complete. High fog density is needed to visualize airflow and turbulence in large cleanrooms. Fog density affects how visual the airflow is and controls the distance the airflow is visible to your eye or to a video camera. To determine fog density of your fogger, determine your liquid volume in milli-liters and determine the normal operating time. Liquid volume in milliliters / total minutes = fog density per minute. Which ultrapure Nitrogen fogger is best for the cost? The AP35 uses 35 L (35000 ml) of LN2 and 5L (5000ml) of water. 40 total liters (40,000 ml) liquid operating over a 70 minute time. The AP35 Fog Density calculation is: 40000 ml / 70 minutes run time or about 571.5 ml per minute fog density; i.e. 571.5 ml liquid converted to fog each minute. Competitive foggers convert less about 9 liters of LN2 and 2 L of DI Water, which calculates the fog density at about 244 ml fog density per minute during a 45 minute operation. The AP35 Ultrapure Portable Cleanroom Fogger produces twice the fog density, twice the visual airflow distance and 3.5 times the fog volume as compared to other ultrapure foggers, and the cost of the AP35 is nearly the same as competitive LN2 foggers.

Ultrapure fogger – The AP35 LN2 fogger is used in clean rooms, sterile rooms and ISO suites providing visualization of airflow, flow patterns, dead spaces and turbulence. Nitrogen fog generators provide a high purity fog to support Pharmaceutical guidelines, USP 797 In-Situ Airflow Analysis, ISO 14644-3 Annex B7 guidelines and Federal Standards 209E in semiconductor clean rooms. It uses a modular design for simple operation and maintenance. A Nitrogen Fogger uses two sources to produce an ultra pure fog. The process combining the liquid nitrogen and DI water includes boiling the liquid nitrogen and DI water. As the LN2 and DI water boils, the vapor droplets are combined to form the highest purity of fog and highest fog density, which is not matched by any other type of fogger. UltraPure fog provides the greatest visible distance of the airflow turbulence, patterns. The ultrapure fog can easily describe how airflow is balanced in a sterile room or ISO suite. The nitrogen fog generator is sometimes referred to as a smoke machine by facility staff. In fact it does not produce smoke at all, which would be a particulate type of fog. The manner in which the nitrogen fogger produces fog causes DI Water and liquid nitrogen to boil in separate LN2 dewar. The DI water comes to high temperature forming a water vapor composed of vapor droplets less than 2 microns in diameter. Although DI water is quite clean, there is some remaining residue in the DI water. During the DI Water heating process, any remaining residue in the DI water gets attracted to the walls of the DI Water chamber, which is grounded. This helps to provide an ultra pure fog using a typical 16 Meg Ohm Distilled water or WFI water for injection. The water vapor droplets then pass over the Liquid Nitrogen Dewar, where the LN2 boils at room temperature. The resulting combination of water droplet and nitrogen droplet forms an ultrapure fog droplet at a nominal 2-3 micron diameter; which creates a very dense, low pressure, ultra pure fog. The high density of ultra pure fog droplets provides the best visualization of the airflow and turbulence, increases the distance at which one can see the airflow and it is the most pure form of fog that can be used in a cleanroom. An ultrapure, nitrogen fog generator creates a particle free, non-contaminating, high purity fog, leaving no residue behind as the ultra pure fog evaporates back to the air components that we breathe, nitrogen, oxygen and hydrogen. The fog enters the airflow at very low pressure, thus it does not create a turbulence, making the UltraPure nitrogen fogger the best cleanroom fogger suitable for use in Class 1 – 100,000 clean rooms for airflow, turbulence visualization, flow balancing and contaminant transport studies around process tools. This ultra pure fog is typically used to support USP 797 In-Situ Airflow Analysis in Pharmaceutical sterile rooms, barrier isolators and ISO 1-9 suites. 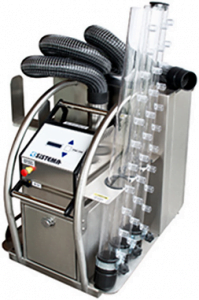 The AP35 Ultrapure Fogger is used in smoke studies requiring higher volumes of ultrapure fog. No fog contamination and no clean room clean up is required after use. Operating instructions are emailed as a PDF manual.

Theory of Operation: Ultrapure fog generation using liquid nitrogen and DI water or WFI Water. Use of any other liquids or chemicals will void the warranty.

Which Smoke Generator Is Better For Smoke Studies?